THE FUTURE OF THE WIRELESS ART

Mr. Nikola Tesla, in a recent interview by the authors, as to the future of the Wireless Art, volunteered the following statement, which is herewith produced, in his own words.

"A mass in movement resists change of direction. So does the world oppose a new idea. It takes time to make up the minds to its value and importance. Ignorance, prejudice and inertia of the old retard its early progress.  It is discredited by insincere exponents and selfish exploiters. It is attacked and condemned by its enemies. Eventually, though, all barriers are thrown down, and it spreads like fire. This will also prove true of the wireless art.

"The practical applications of this revolutionary principle have only begun. So far they have been confined to the use of oscillations, which are quickly damped out in their passage through the medium. Still, even this has commanded universal attention. What will be achieved by waves, which do not diminish with distance, baffles comprehension.

"It is difficult for a layman to grasp how an electric current can be propagated to distances of thousands of miles without diminution of intention. But it is simple after all. Distance is only a relative conception, a reflection in the mind of physical limitation. A view of electrical phenomena must be free of this delusive impression. However surprising, it is a fact that a sphere of the size of a little marble offers a greater impediment to the passage of a current than the whole earth. Every experiment, then, which can be performed with such a small sphere can likewise be carried out, and much more perfectly, with the immense globe on which we live. This is not merely a theory, but a truth established in numerous and carefully conducted experiments. When the earth is struck mechanically, as is the case in some powerful terrestrial upheaval, it vibrates like a bell, its period being measured in hours. When it is struck electrically, the charge oscillates, approximately, twelve times a second. By impressing upon it current waves of certain lengths, definitely related to its diameter, the globe is thrown into resonant vibration like a wire, stationary waves forming, the nodal and ventral regions of which can be located with mathematical precision. Owing to this fact and the spheroidal shape of the earth, numerous geodetical and other data, very accurate and of the greatest scientific and practical value, can be readily secured". Through the observation of these astonishing phenomena we shall soon be able to determine the exact diameter of the planet, its configuration and volume, the extent of its elevations and depressions, and to measure, with great precision and with nothing more than an electrical device, all terrestrial distances. In the densest fog or darkness of night, without a compass or other instruments of orientation, or a timepiece, it will be possible to guide a vessel along the shortest or orthodromic path, to instantly read the latitude and longitude, the hour, the distance from any point, and the true speed and direction of movement. By proper use of such disturbances a wave may be made to travel over the earth's surface with any velocity desired, and an electrical effect produced at any spot, which can be selected at, will and the geographical position of which can be closely ascertained from simple rules of trigonometry.

"This mode of conveying electrical energy to a distance is not 'wireless' in the popular sense, but a transmission through a conductor, and one which is incomparably more perfect than any artificial one. All impediments of conduction arise from confinement of the electric and magnetic fluxes to narrow channels. The globe is free of such cramping and hinderment. It is an ideal conductor because of its immensity, isolation in space, and geometrical form. Its singleness is only an apparent limitation, for by impressing upon it numerous non-interfering vibrations, the flow of energy may be directed through any number of paths, which though bodily connected, are yet perfectly distinct and separate like ever so many cables. Any apparatus, then, which can be operated through one or more wires, at distances obviously limited, can likewise be worked without artificial conductors, and with the same facility and precision, at distances without limit other than that imposed by the physical dimensions of the globe.

"It is intended to give practical demonstrations of these principles with the plant illustrated. As soon as completed, it will be possible for a businessman in New York to dictate instructions, and have them instantly appear in type at his office in London or elsewhere. He will be able to call up, from his desk, and talk to any telephone subscriber on the globe, without any change whatever in the existing equipment. An inexpensive instrument, not bigger than a watch, will enable its bearer to hear anywhere, on sea or land, music or song, the speech of a political leader, the address of an eminent man of science, or the sermon of an eloquent clergyman, delivered in some other place, however distant. In the same manner any picture, character, drawing, or print can be transferred from one to another place. Millions of such instruments can be operated from but one plant of this kind. More important than all of this, however, will be the transmission of power, without wires, which will be shown on a scale large enough to carry conviction. These few indications will be sufficient to show that the wireless art offers greater possibilities than any invention or discovery heretofore made, and if the conditions are favorable, we can expect with certitude that in the next few years wonders will be wrought by its application." 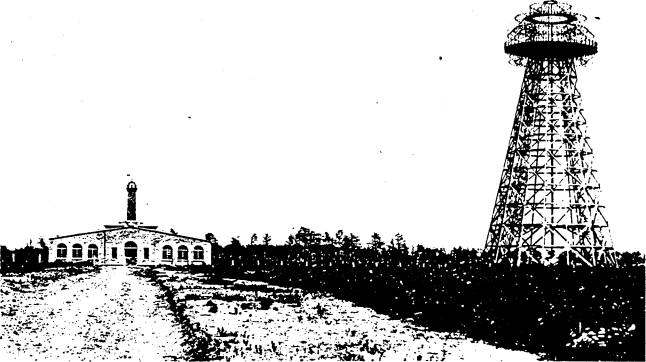