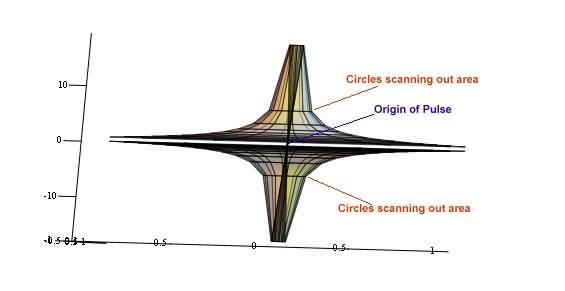 In the above pulse graphic, two radiating circles expanding outward and toward each other and then contract while moving away from each other. The movement scans an area representing the pulse.  Visualize the area between opposing pairs of circles as the surface of an imaginary cylinder (not shown, but inferred.)  The area of the cylinder is equal to the total power of the field in a Tesla coil.

We visualize this mathematically by looking at the electric and magnetic fields of the electromagnetic pulse for the case of a flat spiral coil.

E is the potential in Volts and d is the distance between two potentials.  Similarly, magnetic field strength is -

Where l is the length of wire, Ravg is the average radius of the coil, and N is the number of turns.  Thus

To get the total field power -

Where 2π x Ravg x d is a cylinder as inferred in the diagram above.

The sum of all circumferences of the radii of the coil (same as total wire length of coil)  is what I call the "stroke".

Where velc is the velocity of the total electron magnetic charge.

As the current flows through the flat spiral coil, the energy of each successive winding adds in the direction of the propagation of the pulse.  This is seen in the pulse model as the x axis and the units are in meters per second which is equal to the current times stroke.  The potential in a flat spiral coil is not linear.  Just as the magnetic field is equal to current divided by 2π times average radius, the electric field is equal to potential divided by vertical distance between two opposite charges.  In a flat spiral coil oriented parallel to the surface of the earth, a negative charge builds under the coil and a positive charge builds above the coil.

It is the free distance above and below the coil that increases the energy potential and allows the energy to penetrate the permeability of the surrounding space.

Due to the nature of the expanding cylinder of total field power, it can be seen that a flat spiral coil wound completely to the center of the coil will have the greatest effect on the voltage as the stroke will be the shortest and hence the current will be in its most dense state.  From the point of view of the total power output in the coil, the power will be mostly transferred to potential if the flat spiral coil is wound to the center.  But a flat spiral coil wound completely to the center, of itself, can only produce a high rate of current because there is no distance along the z axis for the voltage to travel in.  So to effect the most efficient and most complete transfer of power between current and voltage a coil must be wound with both a flat spiral secondary and tall solenoid secondary connected to each other.  This configuration happens to be the ideal "magnifier" setup used by Nikola Tesla in his World Transmitter System.

By placing a coil of small radius and tall height in the center of the flat spiral coil, the optimum condition for transferring the energy of declining radius is presented to the charge.  Now as the charge declines in radius and tends to increase in distance from the coil, the distance of the charge will expand along the tall solenoid and each successive turn will add to the potential thus allowing the charge to penetrate the surrounding permeability with great force.

The momentum of the expanding potential is such that it has the force to electrostatically induce movement into surrounding charged particles.  This can cause radio waves.

Per the Aether Physics Model, the rotational component of the flat spiral coil's current occurs as the head of the charge moves from the center winding to the outer winding and back. There is also a rotational component radiating from the wire's circumference. The rotational component is further maintained by the solenoid between the top winding and lower winding.  In effect, the cylinder defined by the total field power rotates as a single unit in one direction when the potential is declining and in the opposite direction when the potential is increasing.  It would follow that in certain cases a spiral effect would be noticeable in the discharge of the upper solenoid terminal.  Such rotational effects have been noticed by several coilers.

Today, this wireless power transmission scheme is being applied to computers, cell phones, and other devices with low power requirements.