Reflecting on the nature of longitudinal waves, it occurred to me that a flat spiral secondary coil produces most of its power in the outer windings of the coil.  This prevents a peak of high potential on the terminal capacitance.   Using the schematic below with a 13" single wound coil, 3.5  turns of RG59 coax as the primary, two .054µF capacitors, a magnetically quenched static spark gap, and 15KV 60mA NST, I setup a flat spiral Tesla coil. 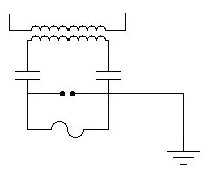 Here are the parts used in this experiment.  In the background and on the pedestal in the image below is the single wound coil as I started with.   In the foreground is a 30" aluminum disk encased in acrylic resin.  There is an insulated wire leading out from the bottom of the aluminum disk.  This disk is electrostatically sealed to prevent electrons from leaking out.  The purpose of this disk is to act like a jug full of air, except that it will fill up with an alternating density of electrons.  The plasma ball on the disk is sometimes used with it's own power on, sometimes used with the single wound coil power through it, and sometimes with both, as will be indicated.  I used my handy flat plate capacitor stand to hold the copper ball in some experiments. 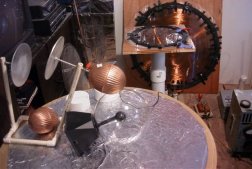 A couple years ago, when experimenting with plasma balls, I noticed they appeared to produce longitudinal waves out the side of the glass.  I supposed the waves were longitudinal due to their nature in lighting fluorescent tubes.  The tubes, when lit by the plasma ball, showed signs of pulses or standing waves in the light pattern.  Also, the voltage coming out of the fluorescent tube was obviously potent and of high frequency, but I could not get it to induce into a stepdown transformer.  So when I started this experiment I thought perhaps the plasma ball will help me to identify longitudinal waves.  Now these experiments are just for exploration of concepts and ideas.  As I discover real effects that warrant further study, then I will propose more scientific experiments aimed at getting answers.

In this setup below I have the plasma ball powered by its wall transformer and positioned between two flat aluminum disks.  The aluminum disks capture electrical waves from the plasma ball.  The the leads from each flat plate go to the flat spiral secondary on the stand in the back.   There is no power from the the Tesla coil in this exhibit.  The 1" fluorescent tube is laid over the diameter of the flat spiral.  Although at first, the photo makes it appear as the tube was fully lit, in reality the tube was much darker in the middle.  This photo was taken in the dark, so the camera over exposed the dark area on the 1" tube.  This is significant because the tube was brightest over the outer windings of the coil, where the potential is expected to be greater.  One might think that because the potential is higher in the outer windings it would explain why the light was dim in the middle.  However... 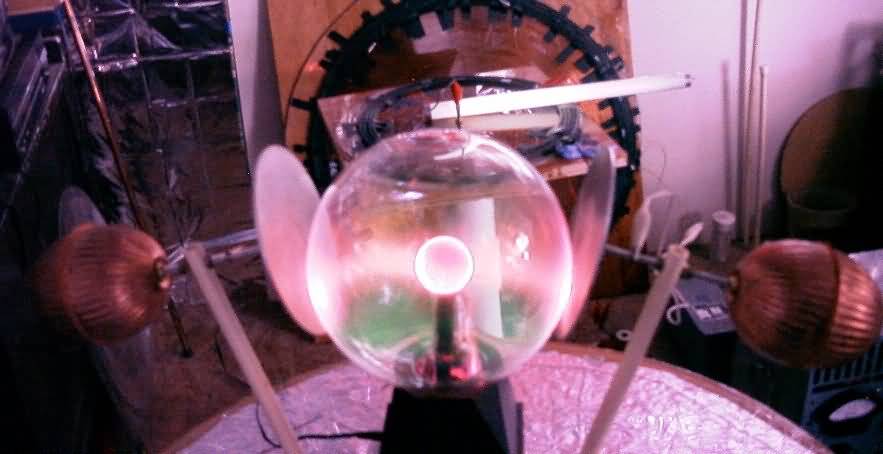 Before doing this experiment, I was reflecting on the nature of longitudinal waves.  It would appear from my earlier research that longitudinal waves do not have an electromotive force.  The potential component of the pulse is in the transverse portion of the wave.  The transverse portion of the wave damps out rather quickly, yet the longitudinal component remains until the energy of the pulse is absorbed by matter or another field.   So if the potential component of the wave is unimportant and the design of the coil is such as to encourage longitudinal waves, then the secondary ground would not be important to the operation of the coil.   This proved to be true.  I was able to get the same results whether the secondary ground was connected or not.  I found I could get approximately 40% better results if I ran the coil in bipolar fashion, with the outer lead turned toward the terminal lead.  This is what I got below... 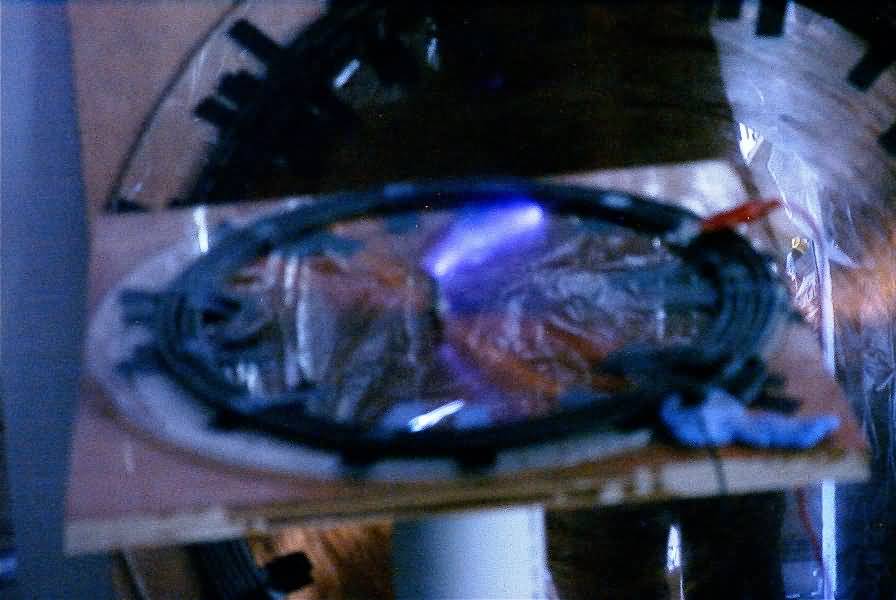 The spark in the photo above is about 3.5" long.  It appeared to be producing discharges mostly in the ultraviolet range.  If the wire were held back further a purple glow would develop and there would be lots of hissing.  A corona in the form of a cone would emanate from both the wire and the terminal post. 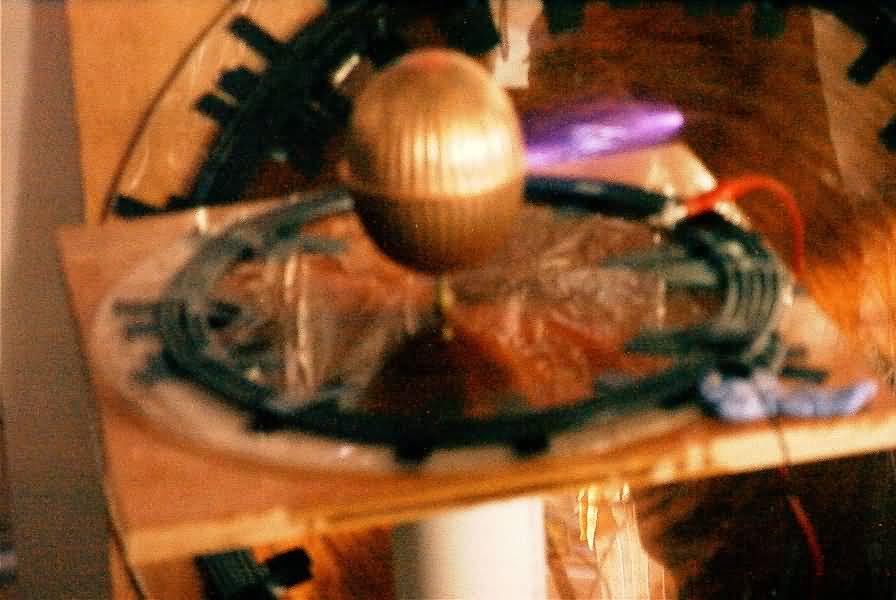 Connecting a copper ball to the terminal does not increase the spark length.  But it does cause sharper sparks and a broader pattern of discharge from the outer lead. 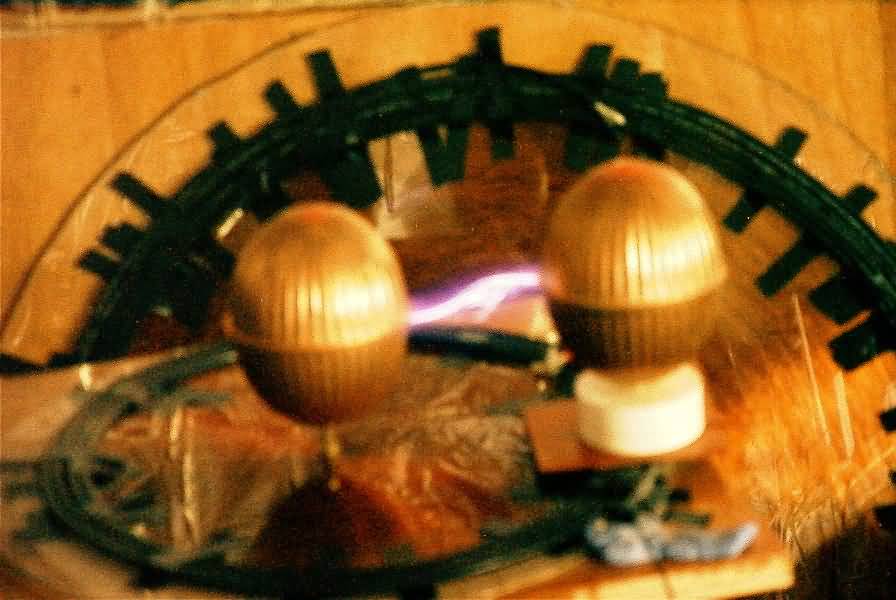 Adding a copper ball to the outer lead really defines the arc between the inner and outer leads.  This coil lends itself well to bipolar operation.

Next I wanted to see if each ball was radiating the same amount and type of energy.  When I brought the fluorescent tube to the outer lead ball, there was little to no action in terms of sparks... 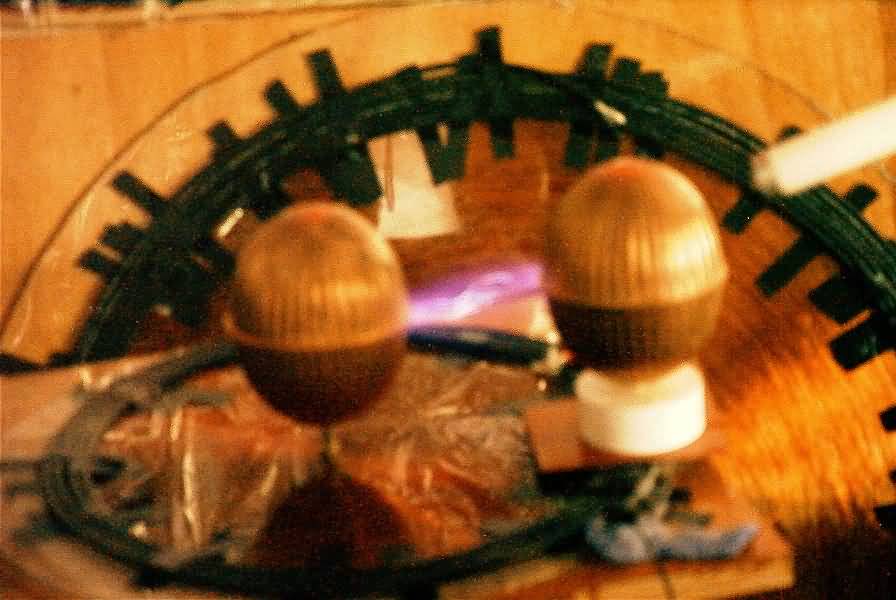 When the tube was brought near the terminal ball, all kinds of sparks shot out... 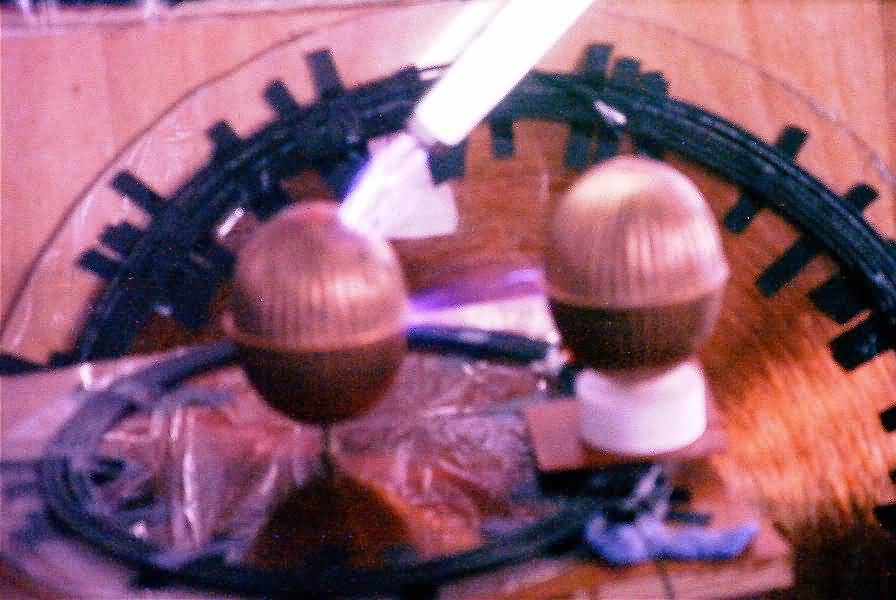 The plasma ball exhibits and conclusion are on page 2.