Today I tested a combination flat spiral and solenoid coil consisting of a flat spiral:

And a solenoid coil:

The total inductance measured with the solenoid coil connected to the center winding of the flat spiral coil was 6.93mH.  The frequency was measured with a frequency generator, voltmeter, and oscilloscope at 428KHz.  While measuring the frequency I noticed many unusual wave patterns.  Most of the wave forms did not look like a sine wave at all.  There would be a sudden peak followed by a partial gradual decline and then a sudden drop to the opposite polarity peak.  It was more like a sharp pulse than a sine wave.

Total secondary capacitance was back-calculated at 19.95pF.  This included the 4" diameter copper ball seen below.

The spark gap is an air cooled 8 point series gap with only two gaps used.

Below is a picture of the secondary setup... 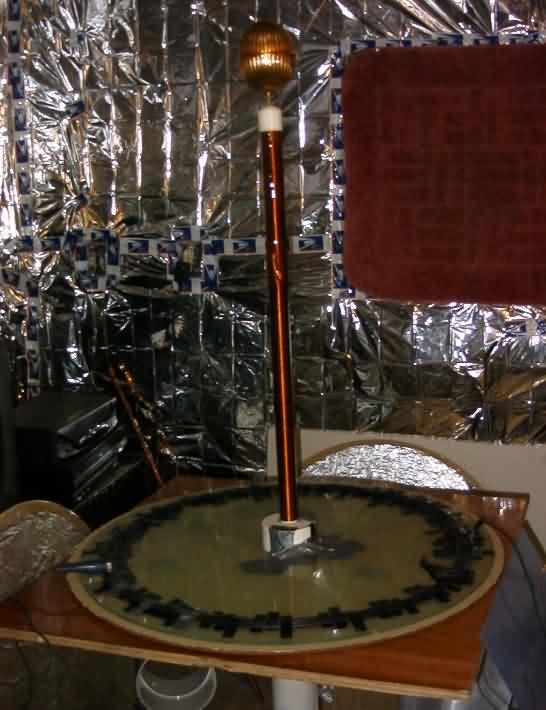 During the calculation and tuning process, however, I decided to start with the resonance of the total system.  Before doing more exotic tests, I felt it important to apply standard Tesla coil operating techniques to get a benchmark.  Using the above parameters and tuning for 428KHz, I got output as seen below... 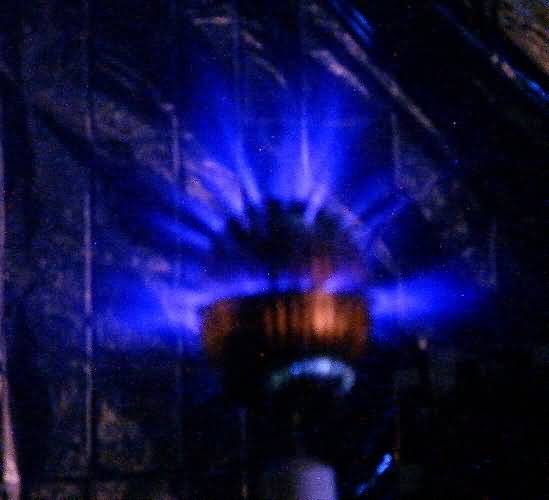 There was nothing particularly striking with the output of this setup other than the pattern of electric jets (I incorrectly called these streamers at first) from the copper ball.  The electric jets were straight and occurred consistently from the same positions.  They did not dance around like streamers on a solenoid-only coil behaves.  In fact, the output of the flat spiral / solenoid combination resembled that of a plasma ball under high pressure but without the rarefied gas effect.  The electric jets were not particularly long and varied from 2 to 4 inches.

One other interesting observation is that even though the spark gap ran continuously, the length of the electric jet output varied.  After making a few adjustments for closer resonance the electric jets dropped back to less than an inch in length and expanded out to 5" in length.  There was no particular rhythm to this expansion and contraction effect.  It almost seemed as though the coil was responding to the electric field in the ground connection or surrounding atmosphere, or both.

In the section of the solenoid covered with polymer coating, there were no corona discharges.  But in the lower part of the solenoid coil, specific locations emitted a jet of ions and generally glowed with corona.

After running the above tests, I connected a 30" flat disk to the bottom of the flat spiral coil center lead.  The rest of the coil remained in the same configuration.  The lower disk did not diminish performance much.  But there were ion leaks around the disk which did slightly reduce the output at the copper ball.  With the copper ball removed there was still discharge in the same pattern but emanating from the 1/4" brass threaded rod.  I'm going to disassemble the coil tonight and coat the disks, copper ball and solenoid coil with another layer of polymer coating.  I'll also try to find something to use for immersing the capacitors in oil.

When I start the coil up again tomorrow night I'll try to tune to the resonant frequency of the flat spiral coil alone and see if I can get four wavelengths in the combination system.  [I never got around to this experiment as I began looking into the physics involved.]