The following exhibits are not conclusive, but are merely posted to show the results.  I will need to build a solenoid coil to compare results with.

The picture below shows the output of the single wound spiral connected to the two flat aluminum plates on either side of the plasma ball.  Notice the curved structure above the center ball that appears to be caused from two opposing forces.  The plasma ball is not powered from its internal power supply in this picture. 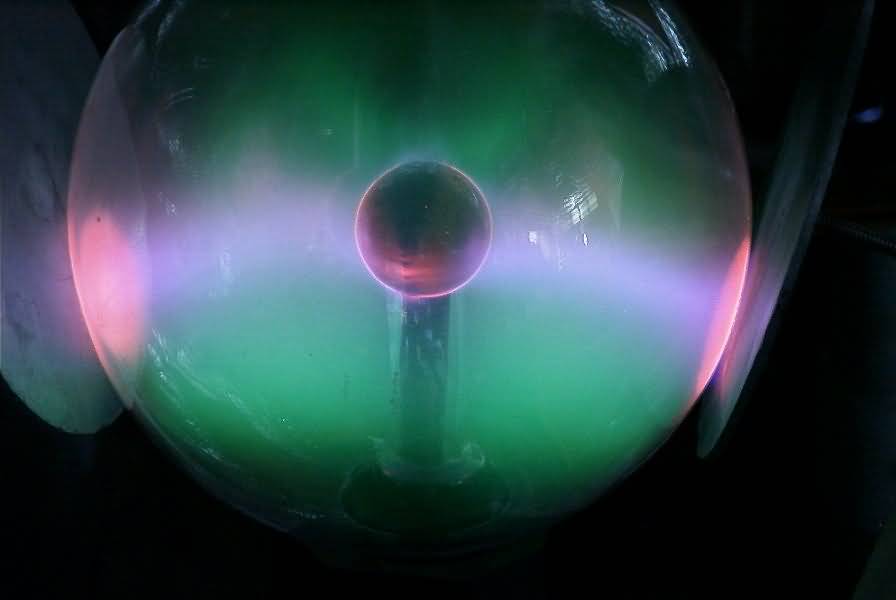 In the picture below, the power supply from the plasma ball is turned on.  You can tell it is on by the upward purple streaks near the base of the center pillar.  Notice that there is still remnants of an opposing force type pattern in the green glow. 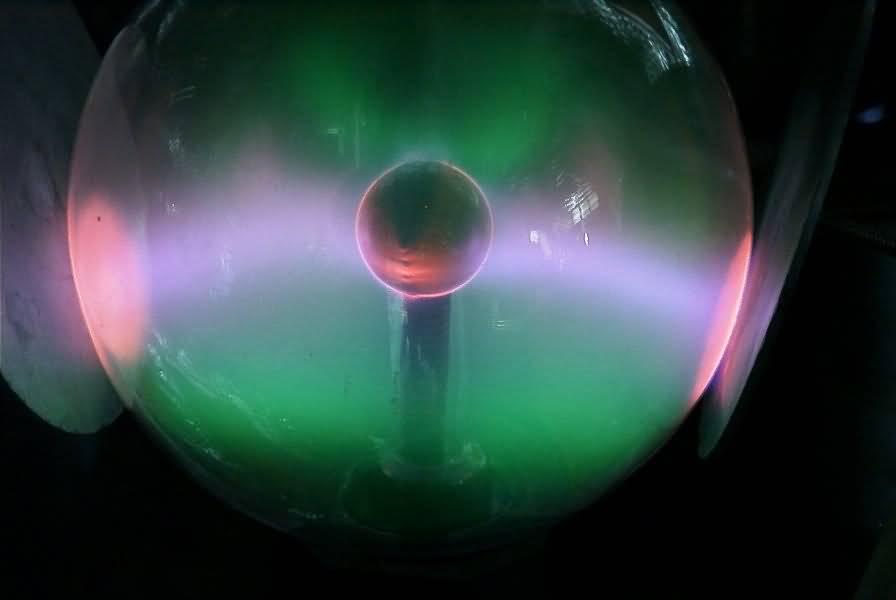 When the power to the Tesla coil is turned off and the plasma ball runs only under its own power, the opposing force pattern is pretty much gone as seen below... 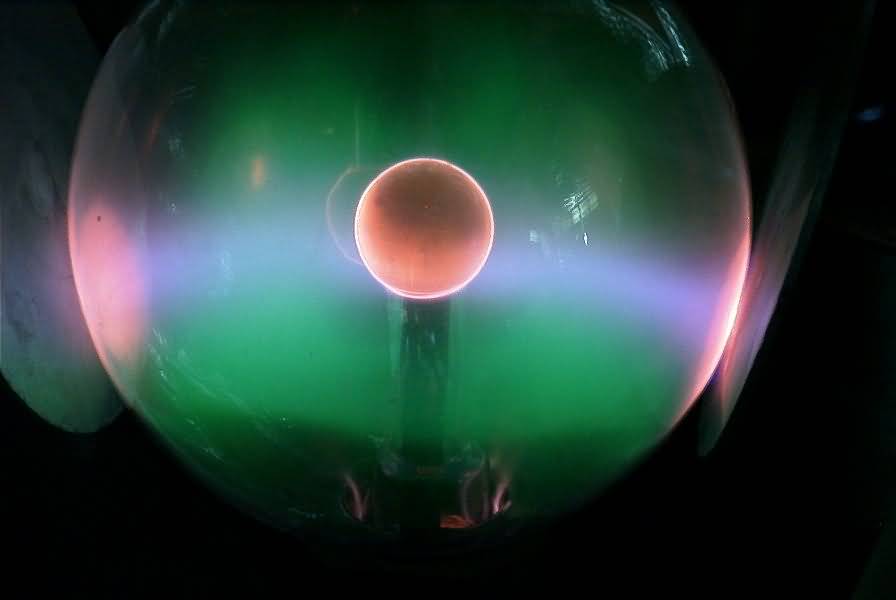 When the electrostatic disk is charged, the plasma ball lights up without a power supply. 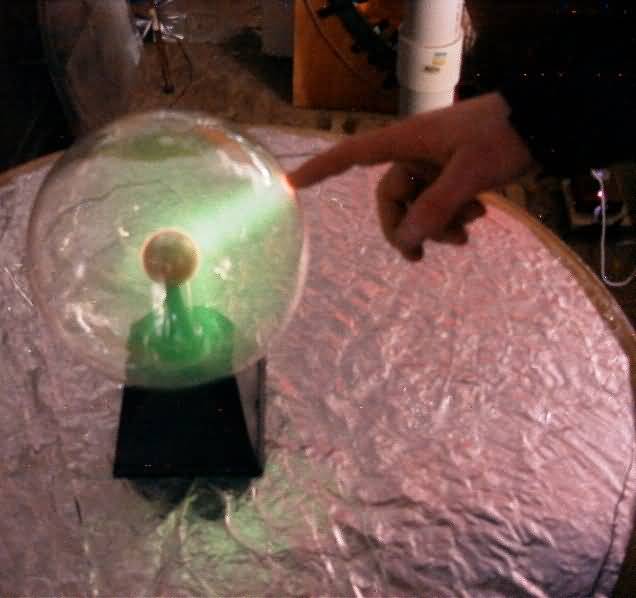 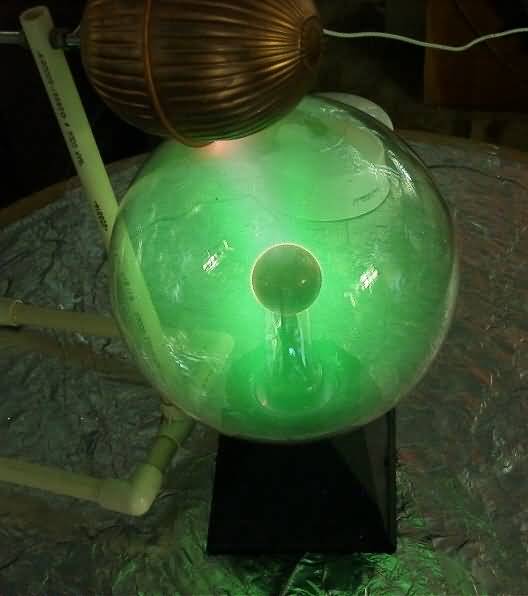 Below the plasma ball is laid on its side so that the globe is closer to the large disk. 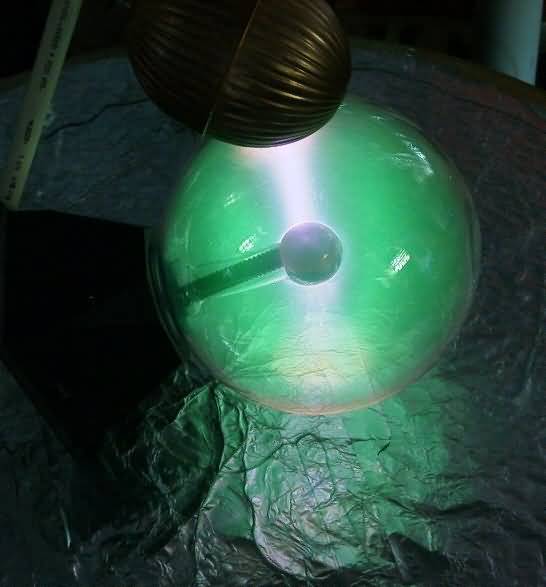 After running the flat spiral secondary with no capacitance for several seconds, the coil begins to develop much greater potentials.  The effects are as seen below.  This, by the way, is not healthy for the coil.  After about 5 minutes of this torture the secondary coil burned the coating off the wire and shorted the outer windings.  It still works, but it is much weaker afterward.  Before the coil shorted you can see the coronal cone jutting up from the terminal and the very strong arcs from the primary to the secondary terminal.  Watching this was far more dramatic than what the camera captured. 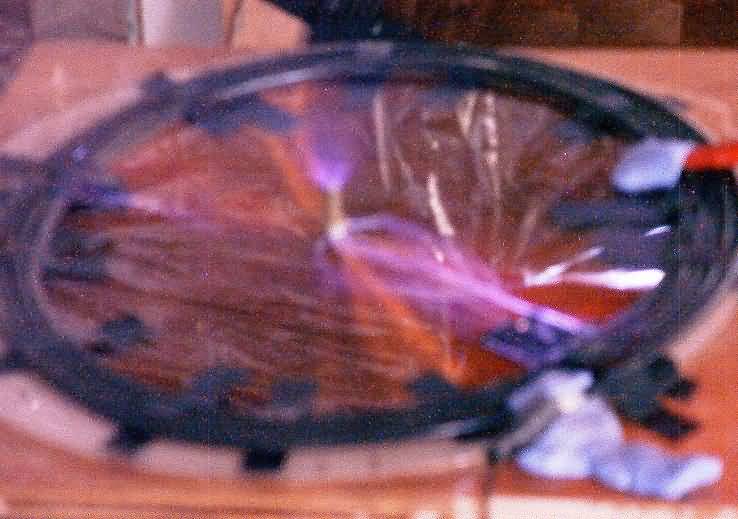 After I could no longer get a strong spark from the single wound flat spiral, I continued the experiments with my trifilar wye coil.  The diagram below shows the connections.  The terminal of the wye coil was connected to the electrostatically sealed 30" disk. 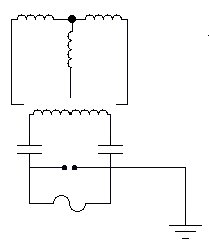 This is significant.  When I removed the electrostatic disk from the wye terminal, the primary did not arc through.  The electrostatic disk was acting like a large jug sitting over a pressurized air hose.  The air coming out of the hose quick fills the jug and then gets pushed back into the hose.  In this case a large charge was pushed into the 30" disk and then pushed back into the secondary causing a very high electrostatic pressure.  This is the best evidence yet of longitudinal waves in the flat spiral coil.  Note the photo below with the plasma ball sitting on top of the wye coil.  The same pattern was seen when the 30" disk was connected to the wye terminal and the plasma ball was set on the disk. 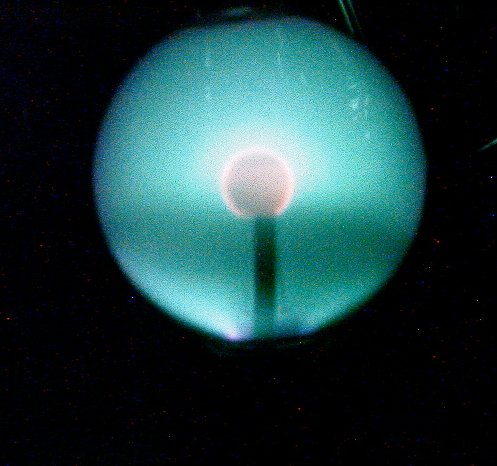 The charge is clearly pushed upward toward the top of the sphere.  The plasma ball was not powered by its internal power supply in the above photo.

Before I can continue using this setup I need to devise an ion valve to allow electrostatic pressure out of the disk.  My guess is that the disk will act as a Helmholtz resonator utilizing longitudinal waves.  If the ions passing through a valve on the disk pass at a certain rate, the disk should resonate and perhaps produce a unique effect.  Also, the ions shooting through the ion valve may produce a practical result.  Just like forced air through a nozzle can be used to blow away dust or spin a turbine, a rapidly moving jet of ions may have similar uses.

These experiments have given me a better sense of how a flat spiral coil works.  I have seen evidence of longitudinal waves that suggest further study is needed.